Been busy with other things, so I haven't done much work on this the last couple weeks.

I've found I can have many many many more asteroids on the screen at once by using a very simple trick:  Any asteroid further than a certain distance is now just a sprite.  Simple, stupid, but effective.
Posted by Carangil at 11:36 PM No comments:

Where am I going with this project? Well, I'm developing three areas of the 'game engine' seperately, but all three using the same common graphics framework:

I can do two things:  1)focus on the graphics code, and fix the indoor bug and finish terrain or 2) I can make a simple game with what I have now and get my code out onto the internet

I am going with option number 2.  In the Asteroids test, or whatever you want to call it, you can fly through space and shoot at asteroids, just like the classic Atari game.  The open-space portion of the engine works just fine, so these are the next steps:
Hopefully this will all be happening in the next few weeks.
Posted by Carangil at 9:31 AM No comments:

Here is a video showing some 3d gameplay.

Posted by Carangil at 8:44 PM No comments:

welcome to my asteroid field

So, as a short term goal for this project, I've decided to work on a 3D asteroids clone: 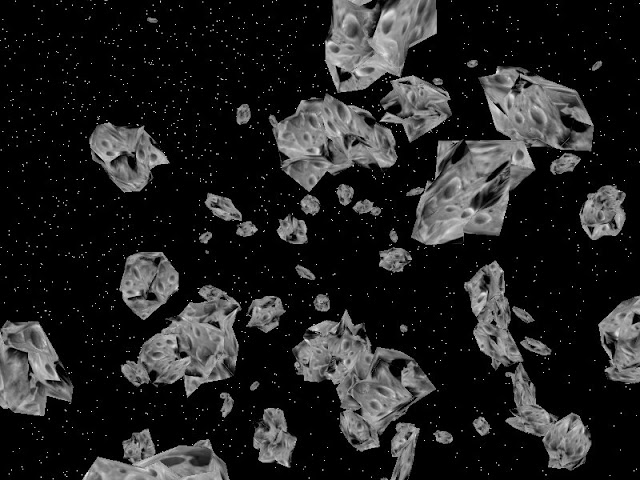 This is in 3D!  So what does this do at the moment:

How am I generating an asteroid?  I'm starting with a cube, and randomly moving vertices around.
Posted by Carangil at 11:54 PM 1 comment:

I need a scenegraph

I need a simple scenegraph for projectZ.  The graphics portion (gx) can already do a lot of basic graphics tasks, and I think that gx itself should be just a renderer that draws what its told to, when its told to. It is the business of the game engine to determine which things are/n't visible.  Where the camera is, which sector it is in, which other sectors are visible, etc should all be determined by not-the-renderer.

I'll make another post soon with details of what the scenegraph will do.

(Does anyone read this anyway?)

The graphics portion of projectZ can do this:

experimental portal system
Posted by Carangil at 11:40 PM No comments:

we have OBJ file loading and some crappy light

I have a very lighting working.  (Nothing special).

I can now load OBJ file meshes.  This is something created using MakeHuman, exported to OBJ and loaded/rendered inside ProjectZ. 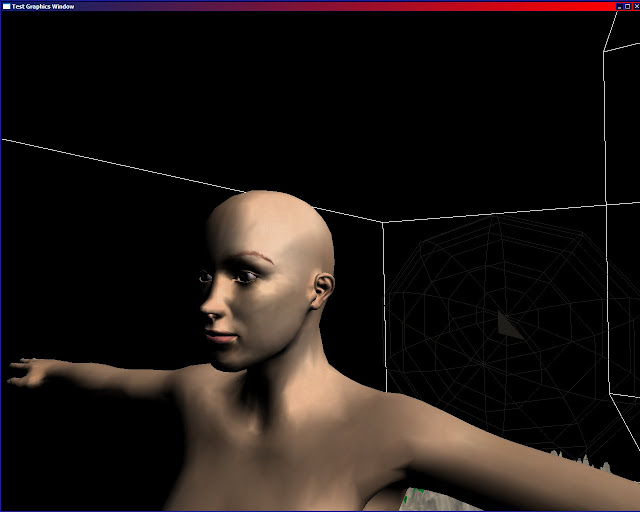 -Fix portal rendering. (It is very hacky at the moment.)

- Any game, 2d or otherwise, will need a sound layer.  I have some old win32 wavout code left over from an old project.  It is current sitting in projectZ's misc-other-code-to-review-and-rewrite folder.  (Ok, its not called that; that folder is called projectZmaybe.)
Posted by Carangil at 1:32 AM No comments:

Ok, I've returned to this project.

A simple line-drawing API that can draw colored lines, circles, arcs and regular polygons.  And it does not use immediate mode!  Why make this?  So far, the 2d graphics API has been sprite-only.  Sprites are nice, but vector games like the original Asteroids or Lunar Lander can't be done well with sprites.

The 3d portion of the renderer has been able to draw textured meshes for quite a while.  These meshes are created programatically by the application.  I need one built-in file format for my graphics library to read.  I'm choosing obj.  Why?  It's a text format, its easy to parse, and I already have old code to look at to read it.  I probably won't use my old code, but at least I have some working reference material to look at when my new code doesn't work!


I need a simple default lighting model.  Yes, yes, the library should let the user load GLSL shader scripts from text files.  That's easy; the graphics driver parses the language and its just a pass through.  BUT the idea of this whole library project is to be easy to use.  I need a simple, basic lighting model that's activated by default so a new user, who hasn't set up lights, will actually see shading as soon as they load and render a model.  An advanced user will set a shader. The entire library so far has been designed so that you just turn it on and draw right away.  All the common stuff is taken care of.  By default 3d has depth buffer on.  By default alpha blending is enabled.  Etc.
Posted by Carangil at 11:37 PM No comments: